10 Steps To Use Records To Build Bodily Injury Litigation Outcomes 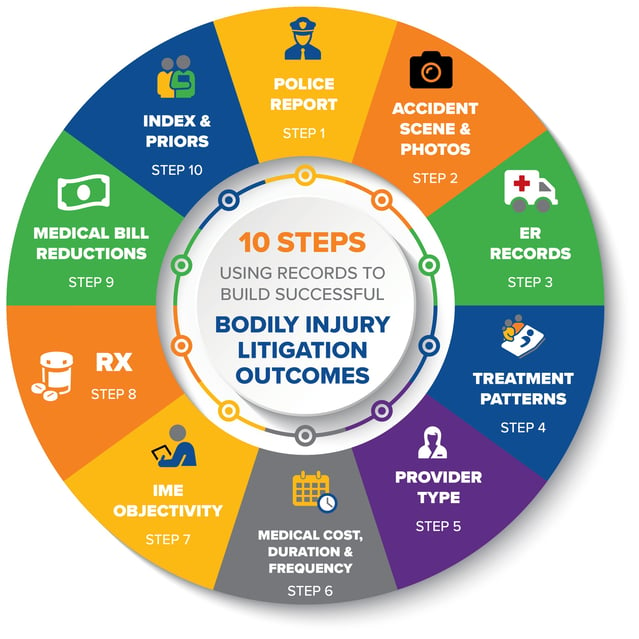 Determining the source of the injury is a critical part of litigating bodily injury claims.

Here is a comprehensive list of the different types of records obtained in Bodily Injury claims and how to use them effectively during litigation:

While generally considered to be inadmissible in court, this document can be a treasure trove of information that will assist with the investigation. Was there any mention of an injury at the scene? Was the injured party transported to a medical facility? Was there any mention of contributing factors against the claimant? Were any witnesses identified? Did the police respond or was a counter report filed after the fact?  Who is at fault for the accident? In looking at claims that are adjudicated, half of all claims involve facts pointing to shared liability.

Are there any other potential tortfeasors? Overgrown bushes, signal outages, missing or blocked signage, absentee third parties and similar factors should always be investigated. Does the movement, as stated by the parties, correspond to what is being visualized?  If a vehicle is involved do the photos match the damage? Are there paint transfers? A white car hitting a blue car will not leave a red paint transfer. What is the directional force of impact? Is the damage such that the injury being claimed may be related? In addition, point of impact plays a significant role in the assessment of comparative fault.

How soon did treatment begin? Were there gaps in treatment? Was treatment provided on evenings and/or weekends? Were you able to verify treating physician office hours?

Was the claimant seen by a chiropractor or medical doctor? If the latter, then what was his or her specialty such as neurology, orthopedics, and the like? What are the medical professional’s credentials? Is his or her license current? Are there any prior or pending disciplinary actions with the current state or in prior states? Can the claimant describe the doctor, medical facility, staff and provide directions from their home and/or work to the facility?

When did treatment start? How long did it last? Was it active or passive? Was it longer than an anticipated expected recovery date among the general population for a similar complaint? Was a bill review tool used to price medical bills based upon proper jurisdictional benchmarks? Were there deceptive billing practices such as upcoding, unbundling or modifier abuse?

Pain management… Did the doctor prescribe medication to ease the complaints of pain? If so, then what type (analgesics, prescriptions, injections)? Was the use excessive? Were opioids involved?

This can be a profit center for plaintiffs who can run up significant bills to use as leverage for a bigger settlement based upon multipliers, an outdated and ineffective concept sometimes still used to calculate pain and suffering. But as soon as the claim is settled, the attorney will often call the provider and offer them pennies on the dollar to resolve the lien, further increasing the net settlement dollars. Taking this card away is a crucial step in the negotiation process. As part of the demand, attorneys need to be advised that all bills, including HCFA (Health Care Financing Administration) and UB (Uniform Billing) forms, need to be presented. They need to include diagnosis and CPT codes.

Did the claimant have prior claims or injuries? There is a percentage of the population that will abuse the system in an attempt to get compensated for every malady. Adjusters need to do a detailed investigation, including seeking out prior providers, reviewing prior indexes, requesting medical authorizations and reviewing old claims. This can be time consuming, but then again so is panning for gold.

Need help obtaining these types of records or for information about additional claims management solutions?